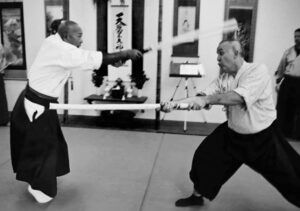 The Jinenkan Tatsumaki Dojo is a South Wales based group which exists for the study and practice of traditional Japanese martial arts.

We are a part of the Jinenkan, an international organisation which has its headquarters in Japan. The Jinenkan was established by Lieutenant Colonel (retired) Fumio “Unsui” Manaka to enable his knowledge of the martial arts of old Japan, gained through a lifetime of study, to be preserved and passed on to his students.

Manaka Sensei has authorised a number of his students to teach his arts and consequently Jinenkan Dojo (training halls) can be found in a number of locations in Europe, The USA, Australia and Japan. Each of these Dojo are run by Dojocho (Dojo leaders) who have attained rank of at least third dan. 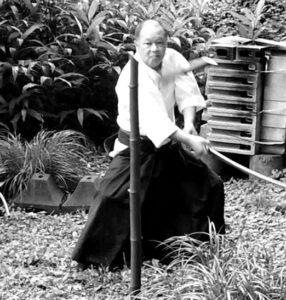 Manaka Sensei
Manaka Sensei began studying the arts which are taught in the Jinenkan when, at the age of 14 after winning first place in the 1959 Northern Chiba Prefecture Judo Championships, he was introduced to Hatsumi Sensei and asked to become his student.

Manaka Sensei continued his studies of the martial arts under his teacher for 37 years until 1996 when he established his own organisation, the Jinenkan and took the Martial Name “Unsui” a Buddhist term which literally means “clouds and water” used to refer to an independent seeker of enlightenment.

Clouds and water symbolize Unsui Sensei’s thinking about martial arts: that one should learn to move as the water flows or as clouds fly: sometimes gently and slowly, sometimes quickly and powerfully. 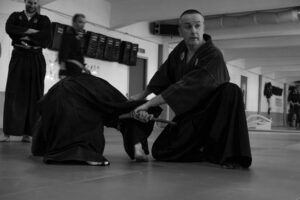 John Anderson
The instructor at the Jinenkan Tatsumaki Dojo is John Anderson who has been studying traditional Japanese martial arts for thirty-six years. In October 2003, John passed the Jinenkan 3rd Dan test at a seminar with Manaka Sensei held in Aberdare and was given permission to open up a Jinenkan Dojo which is currently one of only two in the UK.

In July 2010 John was given the Bugo (martial arts name) of Sei Ryu (静龍 – “Still Dragon”) meaning “an excellent person of great power who remains calm” by Manaka Sensei in a special ceremony held to mark the start of the first Jinenkan Dojo-cho (instructors) seminar held at the Jinenkan headquarters in Nodashi, Japan. He currently holds the rank of 6th Dan in the Jinenkan.

In order to continue to improve his knowledge of the Jinenkan martial arts, John travels to Japan to train under Manaka Sensei at least once a year. 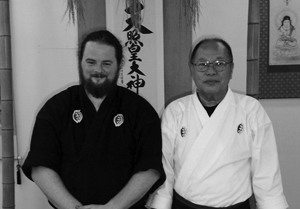 Rhys Gronow
Rhys first began his training in Japanese martial arts in 2009 and three years later, he attended his first training session in our Dojo, becoming a member shortly afterwards.

Since joining our Dojo, he has had the opportunity to travel to the Jinenkan Honbu (Headquarters) in Japan to study sword techniques directly under Manaka Sensei.

Rhys passed the test for Shodan (First Dan) in October 2016